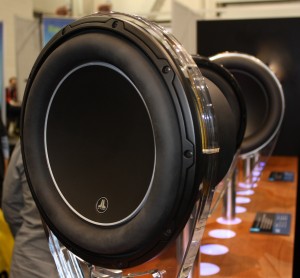 During CES 2012, I had a chance to check out some of the great improvements and new additions JL Audio made to their car audio line up.  Some of these additions include 10″ and 12″ W3 shallow mount subwoofers, a new line of Slash series amps as well as redesigns of their W1, W3 and W6 line of subwoofers.

JL Audio has always been a tried and true American car audio company.  In fact, they’re the only car audio company I’m aware of that still manufacturers products in the USA.  Their quality is reminiscent of the days of great American car audio.  While other brands like Rockford, ADS, Orion, PPI, Phoenix Gold and others sold out and shipped manufacturing overseas, JL did what they could to stay as close to their values as possible, despite changing economies and market shifts.  That’s why I have a W6 in my car; it’s the best sounding subwoofer I’ve heard and it’s part of the line of subwoofers JL Audio offers that are made in the USA. 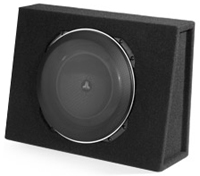 JL’s 13TW5 was our first introduction to JL’s family of flat line subwoofers.

During 2008, while other companies were implementing layoffs and cutting costs, JL Audio was busy at work engineering new products and spending their time and money redesigning their future line of car audio equipment.  When the market your business operates in changes and business drops as a result of that, you may see your competition struggling, cutting back costs or they may fail and bow out (unless you’re lucky enough to be a bank, insurance company or automobile manufacturer, instead of bowing out, you get bailed out).  For the rest of us, that’s the best time to reinvest in your company and JL Audio knows this.  They assumed the economy and market would turn around eventually, and that when it did, they were going to be years ahead of their competitors.  Based on the record breaking attendance at CES 2012 (153,000 and still tallying), I’d say the economy is turning around and JL Audio is now poised to own their market.

One of the revolutionary products JL Audio developed during that time, was their shallow mount subwoofer.  We all know, or should know by now, the 13-TW5.  JL Audio owns the patents on this fantastic subwoofer design Let me just say this.  There are a lot of shallow subs on the market these days.  Pioneer has one, Alpine has one, Kenwood has one too.  I’ve tried those brands and I believe, this is, by far, the best sounding shallow mount subwoofer out of all of them.

JL Audio knows that space is an issue in all vehicles, probably more so than any other car audio company on the market.  JL Audio introduced their line of space saving Stealth Boxes 15 years ago.  Even back in 1997, these guys were well aware of space constraints in vehicle subwoofer applications.  They were creating effective solutions way ahead of their competitors and they continue to do so to this day.  By the way, have you seen their line of powersports audio equipment?  Talk about an audio system in a tight space; try doing it in a Can-AM or a Polaris. 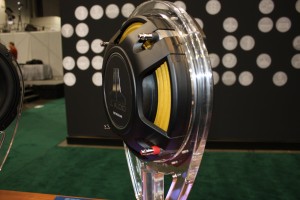 Don’t let the shallow look fool you, unlike other manufacturer’s making shallow mount subwoofers simply by utilizing smaller magnets, these subs have a real magnet and some serious weight to them (about 18 lbs on the 13-TW5).  Leave it to the resourceful engineers at JL Audio, using their patented concentric tube suspension design and floating cone attach method, they’ve been able to produce 3 different shallow mount subwoofers with excursion ratings exceeding that of their traditional W3. 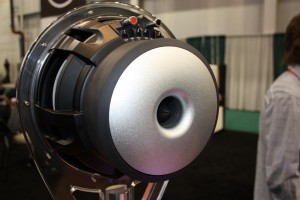 Other subwoofers that got a face lift include the W1 and the W6.  The W6 had it’s last redesign in 2002.  For a car audio subwoofer to go 10 years without a redesign is pretty unheard of, but the W6 is just that good.  Did I mention I have one in my car?  The newly redesigned W6 boasts a larger, more powerful motor system with the 12W6v3 motor system being 20% larger.  Also improved is the linear excursion capability, 14% more than W6v2.  More obvious improvements to the naked eye include an improved cooling circuit design (patented) and a more attractive satin black basket.  I know, I know…..You’re thinking “Who actually looks at that anyways, it’s going to be in a box?”.  Even so, you know it’s there and you know it’s cooler looking than your buddy’s classic 12W6V2.

We always knew JL Audio was great at manufacturing subwoofers that not only sounded good, but looked good. Perhaps you’re wondering what can we use to power these awesome new subwoofers?  Especially for those tight space applications? 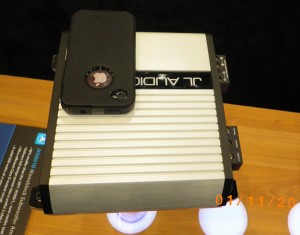 Check out the newly redesigned JX 500/1D.  The new 500 watt RMS mono amplifier is 43% smaller over last year’s model.  Moving away from the class A/B amplifier design, the new JX 500/1D utilizes the far more efficient Class D amplifier technology.  Consistent with their line of space saving subwoofers, once again, JL Audio was able to pack a mighty punch in a tiny package.  Measuring at only 2.09″ x 7.68″ x 7.83″, you will have no excuse as to why you can’t fit a subwoofer in your car.

Not digging the size?  Maybe small just isn’t your thing.  Don’t worry, JL Audio has revamped their classic Slash series amplifiers.  The striking new look features an all-black finish that is a drastic change from their signature silver/titanium finished amps.  The distinct appearance of the new Slash series amps is reflective of the fact that the Slash series ARE distinctively different from JL’s JX, XD and HD amplifiers.  Underneath the attractive new cover you will find on-board signal processing that includes a parametric equalizer along with very adjustable and tweakable crossovers, making this amp an installer’s dream choice. 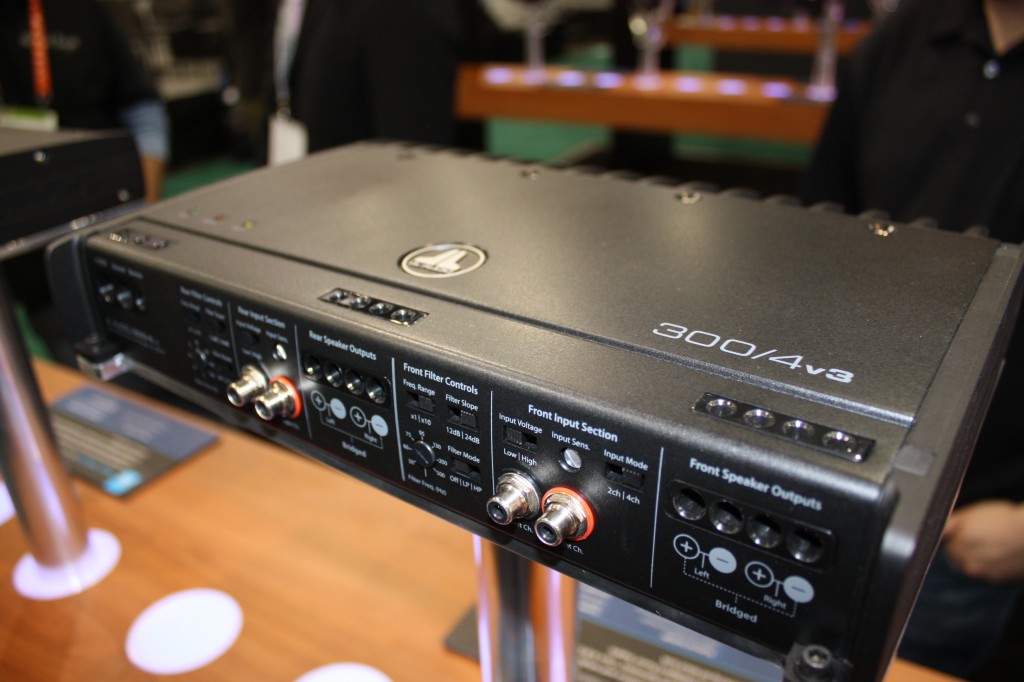 With so many tuning options, make sure you read their detailed instruction manual.  If you don’t know what the adjustments do, you can really screw up your sound, or worse, damage your speakers or the amp.

One of the features that makes the Slash series amps so versatile is their R.I.P.S. (Regulated Intelligent Power Supply) technology.  The regulated intelligent power supply provides consistent power whether you have a 1.5 ohm load or a 4 ohm load, or anything in between.  In addition to the regulated power supply, the Slash series amps are equipped with Advanced Rollback Thermal protection which helps to maintain consistent playback even in demanding conditions. 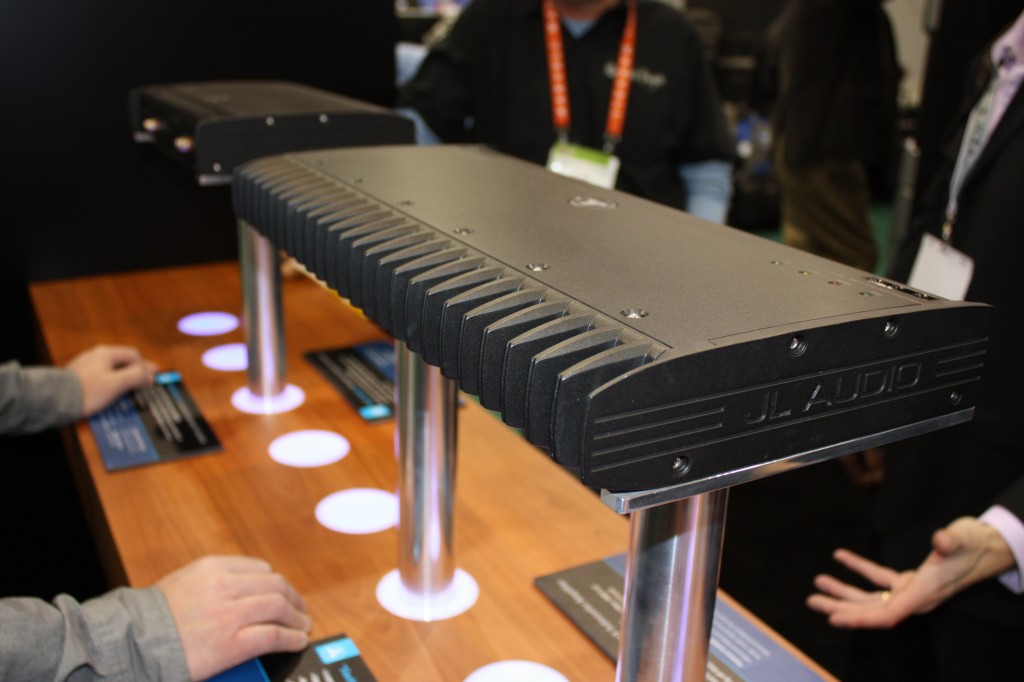 In the monoblock models you will find the output has been increased 20% over the previous Slash series amplifiers.  The 1200/1 v3 is replacing the classic 1000/1v2 mono amp from JL Audio, packing an extra 200 watts over it’s previous version.  Following a similar upgrade is the 600/1v3, replacing the 500/1 v2 with an extra 100 watts RMS power.

But wait, there’s more!  JL Audio is also releasing all new OEM upgrade packages.  Looking for an upgrade over your stock audio system, but don’t feel like overhauling and tearing out everything?  Introducing the Stealthmod.  The Stealthmod is sort of a spinoff from their line of stealthboxes.  JL is making it easier to do an upgrade one step above the basic amp and sub upgrade.  Currently available for the Kia Soul, the Chevy Camaro Convertible and the BMW X5 (with premium audio), JL has designed packages that will not only include a stealthbox, an amplifier and speaker upgrade, these kits will include everything you need to install it all.  And I mean EVERYTHING, including subwoofer control knob, all brackets, fasteners, adapters and every wire you will need pre-cut to the precise length you will need for your application.  These systems are designed to make an OEM upgrade easy and highly effective.  JL Audio will be expanding their list of vehicle applications for  Stealthmods throughout 2012.

With so many innovative quality products to offer, it’s no wonder this company has stood the test of time.  I look forward to sharing the new line up with my customers in 2012. I hope you enjoyed this preview of new products from JL Audio as much as I did.  To find a JL Audio dealer near you, click here.

← Pioneer AVICX940BT revealed at CES 2012 with Q & A by the Car Stereo Chick
Alpine reveals new head units, amps, speakers, backup cameras and more in their 2012 lineup of car audio →