During CES 2012, the Car Stereo Chick had a chance to visit the Alpine booth.  Amazingly, Alpine has redesigned and revamped almost everything they offer in car audio.  Check out the new Alpine products arriving in 2012.

Typically, most brands will redesign and reveal a new line of head units each year and showcase the new models at CES.  Often times the changes are minor over last years model.  Sometimes they only upgrade or change a few models in their line up.  Every 3 years or so, you usually see a speaker and amp redesign.  This year, Alpine has made aggressive changes across the board in their car audio products.  After a few years of dismal head unit offerings, including quirky and disappointing navigation systems, it’s good to see Alpine has taken this year as an opportunity to grow and excel.  Remember the ever annoying adapter upon adapters that were necessary for adding basic features that other manufacturer offered built in?  Thankfully, that is now a thing of the past.  The only add on I found this year for Alpine head units was for adding SiriusXM.  No longer is it necessary to add on a separate Bluetooth module or HD module, just pick the head unit with the features you want built in.

Take a look at all the choices we have here for single din Alpine head units in 2012.  Starting with the CDE-133BT at $159.95, you will get features like built in bluetooth handsfree and audio streaming along with being steering wheel remote ready.  Next up would be the CDE-135BT at $189.95.  The CDE-135BT will add additional features like Pandora control with iPhone, Blackberry and Android using their Bluetooth Plus technology.  Bluetooth Plus eliminates the need for entering a pass code upon pairing.  It also allows for control over Pandora when paired with devices like Android and Blackberry. For $10 more, the CDE-136BT will give you a little more flexibility with expansion as it includes 3 pre-outs.  Both units have a front USB/Aux with an optional USB mass storage mode.

What about HD radio you ask?  The CDE-HD137BT adds HD radio to the list of features for only $219.95.  If you’re looking for a no frills HD radio, the CDE-134HD for only $179.95 will get the job done.  For those that want all the features in a single din option, you’ll want to check out the CDE-HD138BT.  The CDE-HD138BT includes Bluetooth Plus with Pandora control on iPhone, Android or Blackberry, built in HD Radio, three 4 volt preouts, and it’s SiriusXM ready.

Other offerings in the line up this year include a nice, easy to use, basic, double din head unit.  The CDE-W235BT features large easy to use controls, front USB/Aux and built in bluetooth for only $199.95. 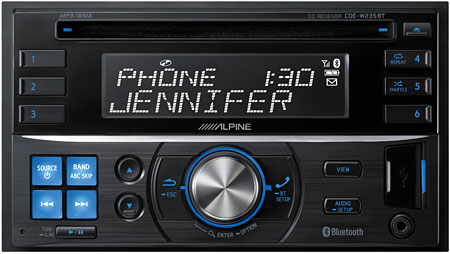 Speaking of double din, Alpine is proud to offer 4 different double din AV units in 2012 starting with the IVE-W530 at $449.95.  The IVE-W530 has a 6.1″ touch screen, 3 band EQ, 3 preouts, rear USB port, built in Bluetooth, along with being steering wheel remote ready and including an optional app mode for iPhone.

Step it up to the IVE-W535 for $699.95 and you’ll add a 4 volt pre-amp section, HD Radio, Bluetooth Plus and you’ll have the option to add SiriusXM.  With the app mode, you’ll have the option of accessing the navigation app from your iPhone.  It’s unclear to me whether or not you’ll have control over the navigation from the screen using the app mode.  The app mode cable feature will not be available until August 2012, even though the compatible double din A/V units are expected the ship in April or May 2012.

The technology to be able to control your phone from your screen is called Mirror Link.  Currently, there aren’t even any phones on the market capable of Mirror Link.  Alpine is testing prototype phones and Sony had their own prototype head unit on display with a prototype Mirror Link cell phone.  When Mirror Link does make it to the market, it will completely change (once again) the way aftermarket car audio manufacturer’s design their head units.  The only downside to this technology is you are still relying on your data plan, which may not be unlimited and you are still relying on your cell service.  Drive through a dead zone and you’ll lose your navigation signal.  For those looking for a more reliable navigation option, Alpine is offering the INE-S920HD.

The INE-S920HD will feature the same 6.1″ touch screen offered in their IVE-W530 and IVE-W535, but it includes an on board navigation system.  Unlike Alpine’s previous navigation systems, the navigation screen on the INE-S920HD has a nice high resolution picture with recognizable graphics and large, easy to use icons.  A clear favorite buttons allows users to customize their home screen with 8 different selections.  Program your favorite source, favorite channel, favorite contacts, favorite addresses and easily access them with the touch of a button.  A nice large volume knob adds to the ease of use on this Alpine navigation system. 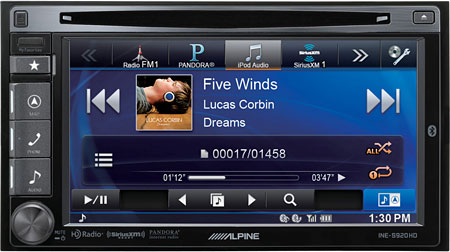 As well as being SiriusXM ready, the INE-S920HD also includes HD Radio built in.  For those looking for better control over their audio system, the INE-S920HD features a 9 band parametric EQ along with easy to program digital time alignment.  Access the audio menu and simply select your cabin style, the number of speakers in your cabin, speaker size, speaker location and listener position.  The Alpine double din navigation system will automatically customize, adjust and implement individual speaker delays to create a balanced and centered sound stage.  With an expected release date of March 2012 and a sale price of only $999.95, I expect this to be one of Alpine’s best selling navigation systems of all times.  I know that sounds drastic, but they really haven’t had a competitively priced, full featured, quality navigation system in well over 6 years.

Working with Scosche Industries, Alpine will be releasing specialized dash kits just for these over sized 8″ navigation systems along with true plug and play wiring harnesses that will make installation a breeze.  For example, let’s say you have a new Chevy Tahoe, equipped with Onstar and steering controls, and you want to install the INE-Z928HD.  Alpine will not only be offering the dash kit you need, they will also be offering an all inclusive wiring harness.  This true plug and play wire harness will be pre-wired and will include a preprogrammed steering wheel control module as well as your Onstar retention module.

Moving right along, next up in the Alpine CES booth was the amplifier section.  Last year Alpine came out with the new X power series amps which were a welcome addition to the limited choices of V Power or PDX series amplifiers.  Boasting similar sound quality and the same Class D technology that is used in the PDX series, the X Power series amps provide consumers a more cost effective alternative to the PDX series without the fancy cosmetics.  This years X Power amps have been given a power boost.  Introducing the all new line of X Power amps from Alpine: 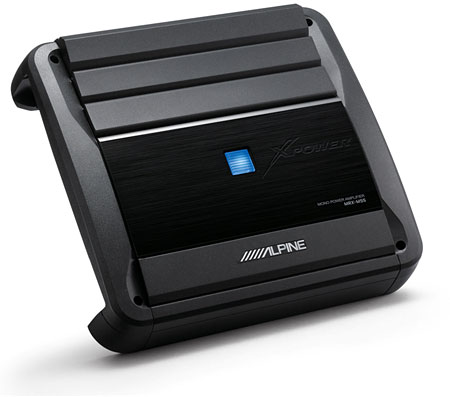 Alpine has quite a few space saving solutions in their amp line up.  One of my favorites is the KTP-445 which is an inline amp, specific to Alpine head units, which provide 45 watts X 4 RMS and is small enough to hide behind a dash,all for $129.95.  Alpine has improved upon this model by offering a universal power pack with RCA connections and more tuning adjustments for only $150.

If you need a powerful 5 channel amp, but don’t want to sacrifice sound quality or space, Alpine’s all new PDX-V9 may be the right amp for you.  The PDX-V9 will give you 100 watts x 4 RMS for your interior speakers and 500 watts RMS x 1 for your sub channel.  An incredibly compact, clean sounding and efficient option for only $699.95.  Compared to JL Audio’s HD 900/5 for $1199.95, the PDX-V9 is far easier on the wallet.  Not only that, I personally believe the PDX line of amps from Alpine have superior sound quality over JL Audio’s HD series amplifiers.

One of the more drastic changes in the Alpine line up for 2012 is within their revamped subwoofer line up.  For starters, the all new Type E, Type S and Type R were all designed to perform optimally in the same exact enclosure specifications.  So whether you buy a Type E 12″, Type S 12″ or Type R 12″, they will all require the same enclosure size.  Both the Type S and the Type R subs have almost doubled in power handling.  The all new Type S is now rated at 500 watts RMS and the all new Type R is rated at an impressive 1000 watts RMS.

Still relatively new in the line up is the flat Type R Alpine SWR-T12. The flat Type R subs are one of the best sounding flat line subs I have heard. 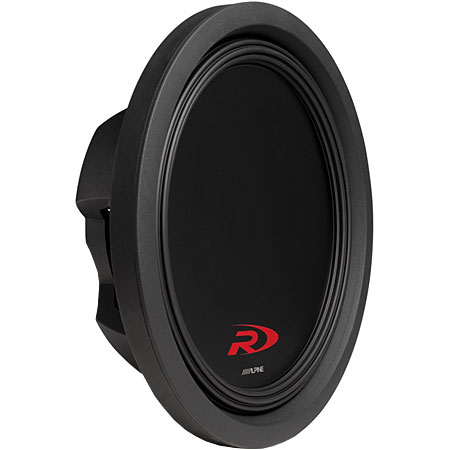 Overall, I was very impressed with the improvements and changes they’ve made with their 2012 line up.  The one question I had for Alpine, and I couldn’t really get a straight answer on this, is why blue?  I wish they would provide consumers a little more flexibility by providing a multicolor illumination feature like so many other manufacturer’s offer.

I hope you enjoyed this review on the hot new products Alpine will be releasing in 2012.  What product do you see yourself purchasing this year from Alpine?  What features would you like to see that were not included in Alpine’s 2012 line up?  I’d love to get your feedback. If you enjoyed this article, please share it! Tweet it, like it, stumble it, whatever as long as you’re spreading the love. Thanks for reading.