Zach wrote to me earlier this week with this question:

“Hello I just got a pyle 1200w 2 channel amp and have a 1600w power cap and am buying  dual voice coil 4ohm kicker s10L7 10″ square sub. 1st will all that work together good and 2nd should I do a dual parallel to the amp or the series wiring? I’m not sure and can a 2 channel amp run 1 ch for the sub and the 2nd for the other speakers I’m thinking not, but didn’t understand. I thank you for your time -Zach”


Aside from the answer I’ve given in the video, the reason you can’t use the 2 channel amp to power the sub and the speaker is this.  2 channel amps are only designed to either run two speakers, a left and a right OR you can bridge the two channels or mix stereo and run it as a mono to a sub (or subs) with a final impedance of 4 ohm.   I hope that helps.  To have your question answered, write to me at [email protected] with the title of your email “Question of the week”.

Hello everyone, I felt I should make a video to give everyone a little better explanation of the difference between 2 ohm, 1 ohm, 4 ohm as well as some more info on series, parallel and bridging. This is the first video post I’ve done, so I was a little confused as to why my computer was mirroring the diagrams I was holding up, but my web guy fixed it (Thank you Scott!). By the way, if you like Scott’s work, check out his website here.

The ohm load effects power output in amplifiers as well as sound quality.

Subwoofers can measure 2 ohm, 4 ohm or 1 ohm. 2 ohm, 4 ohm and 1 ohm impedance’s will make the same amplifier put out different amounts of power and can greatly affect the way your car stereo system sounds and performs.

Dual voice coil means the subwoofer has two positives and two negatives, which give you the flexibility of wiring the subwoofer two different ways giving you two options for final impedance. These variations do not make one speaker more powerful than another despite what many consumers may think. However, the varying impedance will make a difference in what type of output an amplifier will have.

As the ohms drop, the amplifier will unleash more power, but with less control. This is an important aspect to remember. Failing to understand this concept is probably the main cause of self installed amplifiers shutting down and going into protection mode.

So what kind of speakers can we hook up to a mono amplifier? Let’s use an Alpine MRP-M500 mono amplifier as an example. This amp is rated at 300 watts at 4 ohms and 500 watts at 2 ohms. In order for us to get maximum output out this amplifier, using only one subwoofer, we would have to use either a single voice coil 2 ohm subwoofer or a dual voice coil 4 ohm subwoofer wired in parallel.

Let’s take a look at this JL Audio 10W6 which is a Dual Voice Coil 4 ohm subwoofer as an example for the different wiring schematics on Series and Parallel: 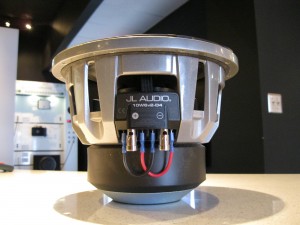 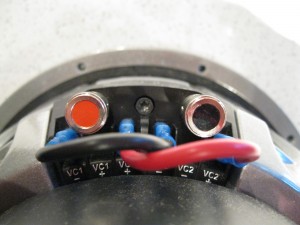 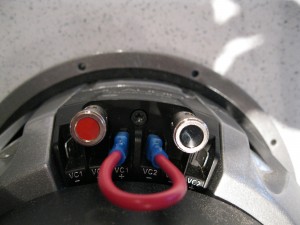 The problem that many people run into, is running an amplifier with the incorrect impedance. Let’s say we were to use that same dual voice coil 4 ohm subwoofer with a 2 channel amp bridged. When you bridge a 2 channel amp, you hook up left positive and right negative. You might assume you are simply wiring it as a mono amp, which in a sense you are. The important difference that is often overlooked is when you bridge an amplifier, the amp sees half the impedance at the terminal which means that 2 channel amp would see only 1 ohm. This is extremely low for a 2 channel amplifier, it would be unleashing a lot of more power than it was designed to along with very little control which would in turn cause the amplifier to heat up very quickly and shut down going into protection mode. Over time this will damage the amplifier.

For a 2 channel amp to work properly bridged, it needs to see an 8 or 4 ohm load at the terminal, this will ensure the amplifier will work properly and not overheat and shut down.

If you own an amp and you’re in the market for subwoofers, make sure you know what final impedance your amp needs to see. And vice versa, if you own subs and you’re in the market for an amp, know what impedance your subs are so that you purchase an amplifier that will give you optimum performance. It helps to talk to your local independent car stereo shop, but if there aren’t any in your area, just email me and I’ll make a recommendation for you. If you enjoyed reading this post, please spread the love. Tweet it, like it, stumble it, or use any other social sharing weapon of choice. Thanks for reading!