This week in the shop

It’s not every day a classic supercar arrives at our shop for a stereo upgrade, but it has definitely become a more regular occurrence. I guess this is what happens when you serve clients that are avid automotive enthusiasts with a seemingly endless rare vehicle collection. The owner of this 1996 Acura NSX is one such client. It’s always refreshing to work with this particular collector because we know whatever vehicle he brings in will prove to be rare, possibly quirky, always interesting and perhaps somewhat challenging.

This Acura NSX stereo arrived equipped with an older style 30-pin iPod adapter, but no AUX Input and no Bluetooth. Additionally, there was an audio issue that needed to be dealt with. Buzzing and popping stock Bose speakers. The goal was to address the buzzing and popping speakers and add a way to stream music through the stereo.

The great thing about this supercar is when it comes to how it’s assembled, it’s basically a glorified Honda. Late model Honda’s and Acura’s are always easy to work on and pretty straightforward in their design. It’s not like trying to work on a hand built Ferrari where you want to strangle the designer of a door panel as you spend hours dissembling it due to its intricate and delicate assembly. The downside to working on this Acura NSX is this car is basically on the floor. It’s a bit of a back breaker just trying to get in and out of the driver’s seat so imagine what it’s like to actually work on it. Can I get some Advil please?

The first thing John needed to do was figure out what was causing the audio issue – was it the speakers? The stereo? Or the stock Bose amplifiers (for which there are 3 of them)? After getting it all apart and testing the output, John confirmed the issue. It was both Driver and Passenger amplifiers plus both door speakers that were in need of repair or replacement. After 25 years, the components were a bit worn out.

Keeping the Stock Look in this Acura NSX Stereo Upgrade

In order to keep the interior esthetics as original as possible, we wanted to keep the stock stereo. Although the client was open to us modifying the dash to install an aftermarket stereo, we advised against this. We investigated sending the stock amplifiers out for repair. However, the cost to repair the amps exceeded the cost of an aftermarket amp.

Using an aftermarket amp would open up more options for replacement speakers because we wouldn’t be limited to using a low impedance speaker. That would have been necessary if we wanted to retain the stock Bose amps. The other benefit of using aftermarket equipment is, theoretically, we’d have better sound quality. After testing the output of the factory radio, John found it had a 3 volt pre-amp level, left and right output. He simply attached RCA ends with Y adapters to that audio signal to go into our aftermarket 4 channel amp.

The 1996 Acura NSX is only equipped with 4 speakers – a stock subwoofer in the passenger floor, an oversized tweeter between the two seats and 4″ speakers in the doors encased in Bose speaker enclosures. We used the JL Audio MX280/4 to power the new door speakers plus the stock tweeter and stock subwoofer which were still fully functional. We chose this JL Audio amp because of it’s super compact design. This car is tight – there is no room for a traditionally sized car audio amp inside the cabin. John was able to mount the new compact amp up behind the glove box where it is tucked away and out of sight.

To add Bluetooth audio, I planned for us to install an adapter to connect to the factory radio via the CD changer input. This would give us an analog AUX input. With that, we planned to use the JL Audio MBT-RX for high quality Bluetooth audio streaming.

What about the speakers?

The stock Bose enclosures are definitely a bit funky. Check it out.

I’m always anxious about upgrading speakers in a car with these types of enclosures. In terms of sound quality, they can make or break the stereo.

After trying a few different options, John found a set of Audison BMW specific speakers worked really well in the factory Bose enclosures. They had the same style mounting tabs and they performed well in the small ported enclosures. We’d finally found the right combination of products to upgrade this Acura NSX stereo and it sounded great!

The stock sub came to life with the new clean amplified signal plus the premium Audison speakers added a level of vibrancy and detail that had been missing previously. In addition, the client now had a super convenient way to listen to music using a high quality Bluetooth audio streaming interface.

The end result is a classic supercar car that looks stock by all appearances, but is equipped with modern day features and premium aftermarket sound. These are my favorite types of audio upgrades.

Never a Dull Moment at the Shop

Just when we thought we had this project all wrapped up, we quickly realized there was a problem. A seemingly big problem. As John tried to start the car to back it out of the garage, the car wouldn’t turn over. It wouldn’t even crank. It had been on the tender the whole time so we knew straight away it wasn’t a battery issue. We were perplexed, because the electrical and stereo wiring in this car is so straight forward. John quickly began retracing all of his steps and then he remembered the keyless entry module that fell out of the dash when he removed the stock subwoofer.

The factory keyless entry module had not been secured on a bracket like you’d expect in any modern day vehicle. It had flopped out of the dash when the stock subwoofer was removed. He double checked all the harnesses and connections going to it before tucking it back up under the dash. Apparently there had been one connector harness he didn’t see that had been lodged out of its place when the keyless module fell. That harness went directly from key and the clutch to the starter. Immediately upon reconnecting it, she fired right up. Nothing like a rare supercar in your garage failing to start up to get your adrenaline pumping. Never a dull moment, that’s for sure! As they say, all’s well that ends well and in the end, this client was super happy and so were we. 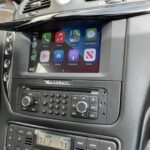 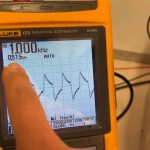