The oversized stereo sits nicely in the custom dash kit that ships with the Alpine X009-WRA.  I had questions about vehicle compatibility while visiting Alpine’s booth at CES 2015.  I was surprised to see it would only fit 2012 and up considering it’s the same Metra dash kit from 2007 and up.  Also, Alpine initially stated it would only work with the 4 door Wrangler and then later back tracked and said it would also work for the two door.  The window switch pod appears to be the same so 2-door vs 4 door shouldn’t be an issue.

Will fit this dash:

A quick google image search showed the heat/AC vents vary slightly from previous years and it looks like that change in style happened maybe mid 2011.  Basically, if your heat/AC vents and window switch pod look exactly like the one shown in Alpine’s Jeep at CES 2015 it should work.  For now, Alpine is stating that the X009-WRA is only compatible with 2012 + up Jeep Wrangler.

Alpine is working on making sure the X009-WRA is packaged with all necessary iDatalink retention harnesses including the ability to retain the OEM USB port and AUX input.  Alpine is also extending their standard 1 year product warranty on all X009 models to a 3 year product warranty (including those X009 models already purchased).  This oversized 9″ Alpine navigation for Jeep is expected to ship in March 2015.  Price is to be determined, but I imagine it will be in the $2500 – $3000 price range like other X009 models. 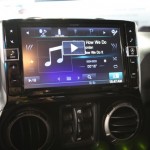 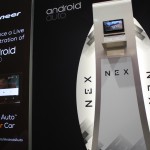