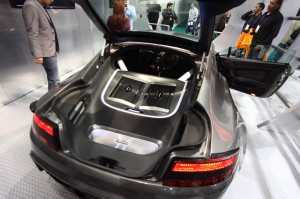 What’s up my fellow car audio lovers? I am getting totally psyched up for the Consumer Electronics Show in Las Vegas which is happening NEXT WEEK. For those of you that don’t know, CES is the largest consumer electronic trade show in the world.

Companies from all over the globe display and promote the newest technologies and innovations they have to offer. If you have a great appreciation for cutting edge future technology and design, you will appreciate the sneak peek of the latest consumer electronic goodies revealed at CES. Vendors will display and demonstrate their sleek, new models that are destined to arrive on the market in 2012.

Join me as I visit and meet with the designers and engineers behind brands like Alpine, Pioneer, JL Audio, Directed Electronics and more. Watch me as I demonstrate new product features and divulge details on upcoming consumer products about to hit the market.

As I discuss the advancements these companies have made, I will also be putting these engineers and designers on the spot.  After selling and installing a couple hundred of these products, I’ve realized that many car audio companies don’t put a lot of time and money into consumer product testing before they go to market. After hearing customer after customer complain about what they consider obvious design flaws (such as miniscule clock displays, tedious menu designs and clumsy controls) I thought it’d be a good idea to speak with some of the men and women who made these decisions and gain some insight into their bizarre design choices.

Do you have any questions you’d like to ask Alpine, Pioneer, JL Audio or Viper? Tell me what you’ve always wanted to say to Alpine, Pioneer, JL or Viper. Check back next week to see what’s coming out in 2012 and how our brands respond when I put them in the hot seat with your questions.